p. 12 “Campaigners make point about state of NHS” – this was CANP at the clocktower Monday

p. 14 “Pharmacists can get extra skills at uni”, subtitled “Masters-level training set up using funding from the NHS”

p. 22 “’Three in one’ clinic aims to speed up care”, subtitled “Try out will boost bowel patients”

Full GMC statement over striking off Jack Adcock doctor
‘This has been a tragic case; a family has lost their son in terrible circumstances and a doctor has lost her career’“Justice for Jack” etc. – the Jack Adcock/Dr Bawa-Garba case – family celebrations,
http://www.leicestermercury.co.uk/news/local-news/full-general-medical-council-statement-1116613

p. 8 “**Meeting will discuss state of the NHS” – tomorrow’s meeting at Secular Hall

p. 16 NATIONAL “Plea to keep nurses” – more should be done to retain them

p. 19 two letters, one by Suleman Nagdi, the other’s author anonymous, under “Reasons to be grateful for NHS – Or not”

24th
letter by Adam Krupa under “Give to the NHS, don’t take from it”

22nd
**Why I quit;nurse lays bare state of the NHS – Nurse explains why she’s leaving NHS in brutally honest letter -“Could you, with a conscience carry on?”

p. 19 a letter, no name, under “Internal chaos to blame at hospital” – blaming the lack of leadership and funding

p. 19 a letter by Tom Barker, Leicester Socialist Party, under “People power can save the NHS” 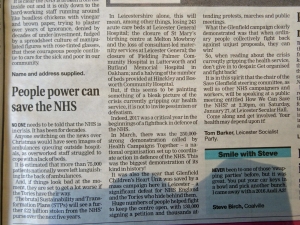 13th
Record number people wating for more than 4 hours for treatment at A&E – They’re worse than the national figure http://www.leicestermercury.co.uk/news/leicester-news/record-number-people-waiting-more-1045562

p. 4 “£4m raised by parking fees at city hospitals”, subtitled “MP Jon Ashworth calls for ‘tax on the sick’ to be abolished”

9th
“Human face of crisis in our NHS”, “’Ticking timebomb’ fears for patients” and various subtitles, 2 cases of delayed ops, incl. One of bladder removal for cancer, twice postponed

A video of 15 ambulances waiting outside the A&E department at the LRI has been viewed 22,000 times

p. 10 “’Help to give her longer with her little boy’” – appeal for cash for proton beam therapy to treat rare brain tumour; I include this because of the question over what the NHS should provide